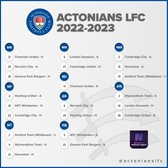 The Fixtures for the FAWNL have been released and the 1st team will kick off by hosting Chesham Utd at Rectory Park on the 21st August. Chesham have been moved across from the South West division and will provide tough opposition on the opening day. This is followed by a bank holiday weekend trip away to Norwich City and then a quick 2 day turnaround as we host QPR at home on the 30th August.

With Billericay Town promoted, and Enfield Town, Harlow Town, Stevenage and Kent Football Utd relegated, as well as Hounslow dropping down from Tier 3, the South East division looks like this.