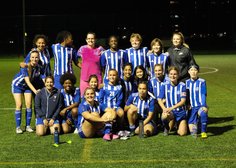 1st team through to the FA Cup 2nd Round Proper

On an afternoon bathed in unseasonally glorious sunshine, Actonians made smooth progress into the Second Round of the Women's FA Cup.

Playing at the facility Northern Ireland used as a training base during the Women's Euros, Danny Harrigan's side began as favourites against an AFC Stoneham side who play two divisions below them.

Swiftly out of the blocks, the visitors put Stoneham under early pressure and saw a fifth-minute effort ruled out for offside.

With 11 minutes played, the referee brought play to a halt when it was decided that the clubs' kits were too similar and Actonians were asked to don their pink training bibs to avoid any further confusion.

Actonians probed frequently with Maria Ledezma-Viso giving her full back plenty to think about on the right-hand side.

The initial breakthrough came in the 18th minute when left-back Chihiro Ebine surged into the box and got brought down, giving the referee little option but to award a penalty.

The Japanese player promptly picked up the ball and calmly converted the spot-kick low to the goalkeeper's right for her first goal since joining the club.

Her compatriot Natsumi Kanno let fly with a long-range effort that went close shortly after as Actonians' dominance started to build.

With the half-hour mark approaching, some more fine work from Ledezma-Viso teed up Dominika Netshcova with a very presentable chance on the edge of the box which she buried low into the corner to make it 2-0.

To temper their hopes of further goals, Netschova pulled up with an injury on 43 minutes and had to be replaced by Jasmine Williamson.

The winger had been the recipient of several heavy tackles prior to this, so it was no surprise to see her limp off.

Seconds before half-time, a rare attack from Stoneham saw a hopeful cross from the left catch everyone out as it hit the outside of the post and cannoned back into play.

Seemingly cruising at half-time, Actonians had to avoid complacency in the second half and they nearly killed the tie off in the 51st minute when another fine run by Ebine saw her upended on the edge of the area only for Kanno to blast the resulting free-kick over the bar.

Five minutes later, Kanno sent in a cross for Shakes who headed home but the flag went up quickly to rule it out for offside.

Rhiannon Ishmael tested the defence with a couple of free-kicks but a third goal was proving elusive.

Kanno created good chances for Williamson and fellow substitute Molly O'Reilly but the keeper was equal to both of them.

With 12 minutes to go, Actonians wrapped up the win when D'Santos drove through the centre before dispatching a slide-rule pass which found Ebineon the left.

She sprinted into the area and slid it under the keeper as she advanced.

Stoneham had a couple of half-chances to pull one back before the end but their shots went wide.

There was almost time for a fourth when Ledezma-Viso sent a rasping drive towards the top right-hand corner but the keeper pulled off a fine flying save to turn it around the post.

It finished 3-0, meaning Actonians have now earned £10,000 from their run in this season's Women's FA Cup.

The next round is on Sunday 27 November so it will be incredibly interesting to see who they get in this week's draw.

My player of the match award goes to Chihiro Ebine - she scored her first two goals for the club, got forward frequently and defended well whilst also ending up on the wrong end of several unpleasant tackles.

Report and photo by James Doe